Today we celebrate those who really make the world go round. Happy Mother’s Day!

Yes, I know it’s not Mother’s Day today everywhere, but here it is :).

On a very personal note (it’s my blog after all), this will be a Mother’s Day I’ll remember. After celebrating the children’s mother with breakfast on the bed (my fiancée, that is), it was time to do some work in the garden (I’m building a pond), but just as lunch was coming up, I accidentally shoved a pickaxe into my left leg!

Nothing nearly life-threatening of anything, thankfully, but after calling 1177, I was adviced to go to the hospital to at least get a tetanus booster. So my fiancée (the family’s super mom) drove me to the emergency room where I not only got a tetanus shot, I was also stitched up.

So I didn’t get very far today with the pond, and I’m pretty happy my day job doesn’t require much physical labor from me. As long as I can climb the stairs to my home office, no one can really tell I had an adventure today.

Eid Mubarak to everyone celebrating the end of Ramadan today. Or as my fiancée would say, jazhntan pirozbet. Had she not been part of my life, I’m sad to say I would probably have no idea that some 20% of the world’s population is celebrating today. But now I do :).

Given that some 7% (ish) of the Swedish population was actually born in a country where it’s common to celebrate Eid, it’s a bit strange that not a single word about this holiday is mentioned on our national public service news.

Having worked from home these past two months, it all of a sudden dawned on me that I should perhaps check whether Internet traffic had indeed increased now with Corona and everything, when rumors have it that all people do in their spare time these days is binge-watching Netflix.

I headed over to Netnod’s website, the company running the biggest Internet Exchange points in Sweden, to have a look at their traffic graphs. This is their two-year aggregate graph as of today for their POPs: 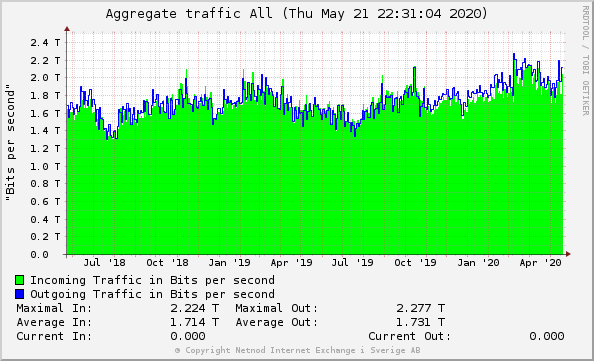 It does indeed look as if April 2020 reaches some sort of peak. Perhaps that’s due to the average growth of traffic on these POPs, perhaps it’s Corona. I don’t know. But if my vision is anything to go by, it looks as if the April 2019 average was about 1.6 TBit/s and the April 2020 average is somewhere around 2.0 TBit/s. If that’s true, that’s a year-over-year increase of 25%. Perhaps people indeed are on Zoom and Netflix a bit more this April.

The Rejected Sale of PIR

Apparently founded only last year, a private equity fund called Ethos Capital with just a single page website as their only online presence, last year offered to purchase Public Interest Registry, or PIR, the registry for the .ORG domain, from Internet Society (ISOC) for the neat sum of US $1.1 billion.

Ethos would have made a leveraged buyout and financed some of the sale by loading up PIR with US$ 360 million in debt. The sale would obviously expanded the coffers of ISOC, an organization with annual revenues around US$ 50 million, so ISOC roundly accepted the offer.

I rarely see things as black and white, but to me this proposed sale was definitely in the gray area. It felt a bit dirty for ISOC to sell off the registry that is the caretaker of the 10.3 million .ORG domains for the world’s non-profits, non-commercials, and charitable organizations to some LBO boys on a PE fund.

On April 30th, ICANN officially rejected the deal - and my inbox was instantly filled with happy cheers from various organizations I follow. The question now, however, is how ISOC and PIR will move forward. In recent blog posts from both of them, it’s now back to normal. EFF on the other hand makes the assessment that ISOC has made it clear it no longer wants the responsibility of being the steward of PIR, so even though the dust has now settled a bit, it will be interesting to see what comes out of this process.

I’m myself a very inactive member of ISOC-SE, the Swedish Chapter of ISOC. I’m pretty sure ISOC-SE has only been in the fringes of this process, if that, but I have a few distant friends within ISOC-SE who are substantially more active, so I’m quite curious what thoughts they have on these developments. I’ll make sure to ask.

Links of the Week

Welcome to my first "links of the week" series of posts :). Here goes:

While working in the garden I always try to catch up on podcasts and radio shows. This weekend I wanted something fresh so I did some googling and stumbled upon an amazing postcast called Europarama. It’s a podcast about science fiction and the future of Europe, and how we can imagine multiple futures for the old continent through science fiction. During the weekend I managed to listen to almost every episode - and they were well worth a listen!

I also learned that Europarama is produced in collaboration with what appears to be a very interesting magazine called Are We Europe, exploring "what it means to be European in an increasingly chaotic world". I have to spend some time exploring their "borderless storytelling" more closely.

This is a link I’ve had in my bookmark collection for some time and it’s really interesting to go back to and look at from time to time. I remember when I first discovered it via TED about a year ago, I hooked up the laptop to the living room TV and the whole family travelled virtually across the world to see how other families are living, organized by income. Dollar Street by Anna Rosling Rönnlund at Gapminder is both eye-opening and entertaining.

Hacker News can be a treasure trove of interesting news for everyone interested in software, internet, engineering, and science. But it can be a tad bit overwhelming and tedious to sift through all posts. Enter Hacker Newsletter, a hand-curated weekly newsletter with the best links from the previous week - all delivered as a pre-weekend treat on Friday afternoons (for us in Europe). A perfect way to end the week. Sign up here.

The other day I noticed that the Free Software Foundation Europe had published a very positive piece of news. They reported that the Dutch minister of internal affairs had published a letter to the Parliament (which I interpret as a letter of intent) where he commits to working towards making sure the source code of government software is, by default, released as free and open software to the benefit of the general public.

In the footnotes of my Google translated version of the document, it also seems as if the Dutch cabinet has already a procurement policy of picking the open source option between otherwise equally suitable pieces of software.

I’m very much in favor of having publicly funded software released to the public under a free and open software license (as well as publicly funded research, reports, data, etc). It feels like most could agree that this should be the norm when it comes the fruit of our tax payer money, yet it’s far from true in most countries.

One small way of trying to change that is by supporting FSFE’s "Public Money, Public Code" campaign and sign their open letter. I’ve done so, and I encourage you to do so too.

The Love of Nature

During the COVID-19 pandemic, Sweden has (as of yet) been one of just a handful of nations that have not enforced any major lockdown measures. Regardless of what you might think about that, my hope is that if there are any positive outcomes of this pandemic, then one might be that the population of this country could have come to rediscover the beauty of the nature around them.

Swedes have long been known for their love of nature, but social distancing recommendations really seem to have turned local trails and landmarks into weekend destinations of choice for most everyone. Never before have our family been out and about as much in our free time, and never before have we met so many others doing the same (at a reasonable distance, of course).

Having this opportunity while others are confined to their homes for weeks, one really comes to appreciate the small things we’ve always taken for granted.

Hello and welcome to my part of the web. This the last in a steady stream of reboots of this blog, but this time, as always, I intend to not stop publishing after just a handful of posts.

In order to keep that promise I’ve decided to accept that my posts will never reach literary excellence, that it’s OK to mix posts in both English and Swedish and that it’s OK to write about any topic I find interesing at the moment (which tend to change on a daily basis).

Even though it’s probably easier to find a steady readership by sticking to a narrow set of subjects, I just have to realize that I’m a generalist in every sense of the word.

And with that, I end this very first post. If you read this far, thank you!